About two months ago I order a bunch of cheap things like make-up brushes and bookmarks (which turned out to be super cute), as well as five rings. I have always loved rings, don’t know why. Now I knew that with the price $1.66-$3.86 they wouldn’t be the most amazing rings on earth. But I was curious how bad, and unlike the shop photo, they really looked. After 1½ month I finally got the package yesterday so let’s go, shall we?

Price: US $3.86 | This lovely ring was just as pretty in real life as it was in the pictures. This even though the flowers were smaller on the ring in real life, and the fact that the ring and band didn’t fit each other. It actually looked way better when you didn’t try matching them into the actual dent. Because somehow the curve of the rings didn’t match up at all… But the worst thing about this ring is that it has two stones on the sides that pokes into the other fingers, making it uncomfortable to wear. Otherwise the ring would have been A+.

Price: US $1.29 | My main complaint about this ring is that the color was real dull in real life, and the fact that there wasn’t any stone on the actual band. Instead it has these lumps that gives the impression that it has stone on it. Since the band is very thin it doesn’t affect it that much and for a bit away it looks good. If it had had actual stones and not lumps it would have been up there on ‘The Good’. 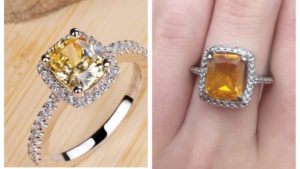 Price: US $1.66 | Now there do I begin with this ring? Well the color is nice, even though a bit to much orange for my taste and not a nice canary yellow as in the picture. Then as  you can see just like the previous ring this one doesn’t have any other stones on it. While that worked on it on this one it doesn’t. Here the lumps are just bumpy on the flat surface not giving it even the illusion of having stones on there. It looks rough and tacky, and I don’t like it. Then there’s a gap on all four sides between the yellow stone and the metal around it, Why?! 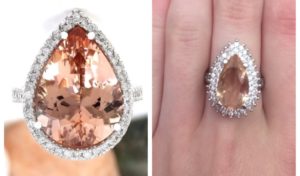 Price: C $3.20 | Now I can see why one would think the ring isn’t that bad and as a standalone ring it’s not. But it looks hardly anything like the ring in the picture on the shop. This ring actually does have stones on it, but it has too many of them. Instead of a large morganite in the middle and a thine frame of stones surrounding it, it has a small stone that dwarfs by the two layers of stones surrounding it. It just looks hideous, and it also has a plain silver band. I hate it as it looks nothing like the advertised ring. 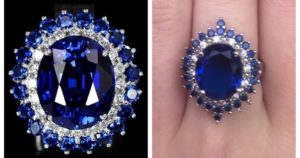 Price: C $3.52 | Lastly we have this one, and I have to say that I got really disappointed when I saw it. I mean just look at it, it’s hideous. If it just had had the white stones I think it would have looked a lot prettier, but the blue stones on the outside just makes it look tacky and something you got out of a gumball machine as a kid. Also why on earth does it have to additional stones on the top and bottom?!

What did you think about these rings? What’s your experience of buying cheap jewelry on eBay or other websites? Let me know down in the comments.