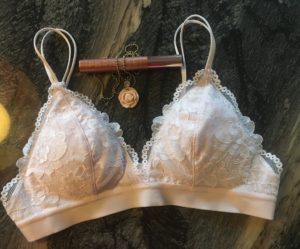 My whole life there’s been this one thing that always could caused me so much insecurity, my small boobs.
I still remember being 11 and seeing how every other girls boobs had started growing while mine was still two tiny lumps on my chest. At first I didn’t pay that much attention to it, I mean they would grow eventually. I hadn’t even hit puberty yet at this point, so that was what I told myself. That after puberty my boobs would fit my body better.
But puberty hit, and then left and nothing. Or, sure they had grown a bit, they had now grown into the smallest B cup size available. But that was it. I had now these two slightly bigger lumps on my chest, and with my square upper body and kind of broad shoulders they didn’t seem to fit. I hated looking myself in the mirror, seeing how wrongly proportioned my body seemed to be.

At this point I was 19 and it was clear they weren’t going to grow anymore. This was then the boob insecurity really put down it roots into my poor brain. Non of the pretty tops fitted me, I just looked sick in them and they just really showed of what I lacked. I couldn’t even rely on bras helping me out. I tell you, no push-up in the world will help make then look either bigger or like I don’t have a deep valley between my two lumps. There just not enough mass to push them enough together to avoid that. If anything it just made me even more self conscious as with it I no longer looked flat but like some weird alien creature with two cones poking out on either side of the chest…
My only option to avoid it was to not wear a bra at all, but then look flat as a road.

I don’t think the insecurity around them would be this severe if it wasn’t for the fact that my older, all around smaller sister had natural C cups. So I have them showed into my face everyday, like teasing me for not getting those genes. I don’t get why I have to get the small boobs gene. I mean my moms are huge so clearly my sister didn’t just got lucky with some ancient gene there. Come to think about it I think a lot of my insecurities are this bad thanks to my sister. She’s this small, pretty girl with perfectly big boobs, hair down to her waist and a perfectly symmetrical face. She’s the contrast thing showing me what a loser I am as I could have been just like her, if just my genetic code had decided to be kind to me instead of only giving me features perfect to fuel a couple of severe insecurities.

Don’t get me wrong, I know that big boobs aren’t always fun. I mean my boobs won’t give me back problems or start sacking later on in life. But I just wished that they could have at least been a big B-cup so they had fitted my body better. I have considered getting breast implants just I can finally feel more comfortable with my body. But it won’t happen, since I know my body most likely wont take well to them. I have enough trouble with piercing my ears, it was a 3 years struggle to get the first ones to heal completely and I have several scars on the back my right ears from all the infections the hole caused me. My holes also moved downwards on their own, my body really didn’t want them there. So I can only imagine how I would react to having something permanent inserting into it.
Anyone else just wishes that for once that life would just be kind to them?