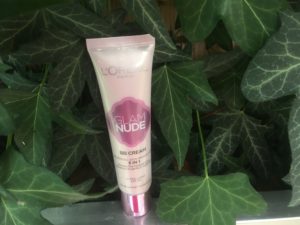 I don’t like putting a lot of make-up onto my face, and neither does my skin. Problem is that my skin isn’t natural smooth and the same color. No it’s red all over my cheeks and nose, and I turn into a living tomato the moment someone give me a lot of attention. The first one I can sort of live with, but the last one is a huge problem. And the only thing that can combat it is covering my face with foundation, then I just can play it cool even though my cheeks are burning.

So my skin routine has been primer, foundation and concealer. Problem is I’m pretty lazy, and likes to sleep in morning so I hardly have the time to put it on which leaves me feeling vulnerable the whole day. So when I saw that a BB cream should be a quick and simply replacement I was up to test it. Anything that helped my skin look amazing and let me sleep longer is a win in my books.
So I took around the inter-webs for the best one to get and settled on L’Oreals. I got the lightest shade, I’m a ghost year round, called Ultra Light.
I was excited when I finally got it in the mail, but that quickly tuned into disappointment. For some reason it turned out yellow-ish on my face. It looked like I’d rubbed a bunch of Cheetos all over it. What was this, how could this possible be ultra light?

So I let my sister try it, she has a somewhat darker skin tone than me so maybe it worked better on her. When she applied it I noticed she kind of swiped and kind of patted it into the skin, not rubbed it on in circles like I had. That’s the moment I got an new idea. It had looked amazing on her, so if my idea didn’t work she could use it so no real loss there. Anyway, so the next day I tried to mimic my sisters way to put it and it didn’t turn yellow. Maybe I was onto something. The final step was to try my new technique to put the BB Cream on and wear it the whole day to see if it oxidized later on.

It didn’t. I wore it all day, being outside in rain and wind followed by bright sun (yes the weather is having massive mood swings). It didn’t look at all that I had anything on my face, yet it keep basically the same shape for the entire day. I guess I will continue to use this one, as I’m really lazy bit at the same time want to look totally bomb.
On a different note I don’t like the tube, the shine makes it pretty much impossible to get a good photo of, and more seriously it’s really hard to get the right amount out of. Some times I have to keep pushing at all my force onto what feels like just trapped air to get something out, then it’s like the gates are open and the product just flows out. This leads to an abundance of cream which I had no other choice than to just remove from my face since it just wouldn’t sink into my skin. So a lot of products just gets wasted which is no fun!

Has anyone else had a hard time applying the cream to the face? And what’s your favorite BB Cream? Comment below.