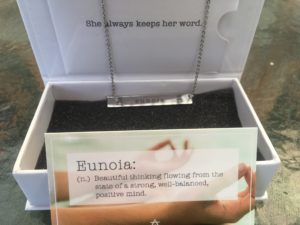 A word is just a word, something you put together with other words to form a sentence, or to shout to exaggerate your feelings towards something or someone. But words have meanings, some a deeper than others. And this is something I stumbled across at the beginning of this year.

A site word after word from different languages with deeper meanings to them. Words that simply can’t be translated, but just exists. I could spend hours upon hours going through one page to the next on, soaking in these new words and what they meant. Some were beautiful and some were pretty useful to know. Like the German word ‘Backpfeifengesicht‘ which roughly translates to ‘A face in desperate need of a slap‘, definitively gonna use that one a lot I can tell.

These words can also help people, keep reminding them to keep going or to keep true to themselves. One that felt personal to me was the word ‘Eunoia‘ which means ‘Beautiful thinking flowing from the state of a strong, well-balanced, positive mind‘. I’m nowhere near that at all, but it’s a good reminder to going. To remember that this is what I’m striving for so nothing I do is meaningless. A company named Speechlust creates jewelry based around these special words. So now I can carry my word, my reminder to keep going, with me all the time (also loves that it’s on a pretty bar necklace).

Another special word to me is Ilunga that means ‘A person who is ready to forgive any abuse for the first time, to tolerate it a second time, but never a third time‘. Why? Well to quote Thomas Szasz “The stupid neither forgive nor forget; the naive forgive and forget; the wise forgive but do not forget“. It’s basically that I will stand by a person if they do me wrong once, twice but if they do it a third time then it is not a mistake but a course of repeated actions. At that point I’m out, since there’s nothing left to forgive. This is just who they are then.

Has you any words that means something special for you? Tell me below!